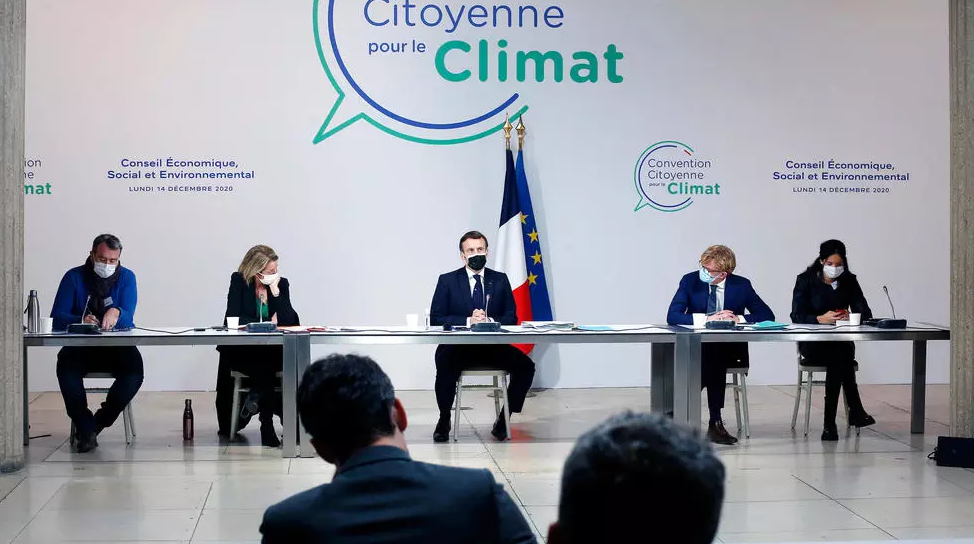 A citizens’ council on climate met for the last time over the weekend to finalise proposals on climate change laws aimed at rapidly transitioning to a greener economy and enshrining the fight for climate change in the French constitution. While some view President Emmanuel Macron’s citizens’ panel as a welcome precedent and a model for more direct democracy, others say it has been fraught with disappointment and frustration.

After nine months of research and rigorous debate, some acrimonious, the Citizens’ Council on Climate (CCC) met virtually for a three-day conference starting Friday to prepare its final submission to the French government on how to cut carbon emissions.

Macron first formed the CCC to advise on climate reforms at the tail end of the “Yellow Vest” crisis in 2019 in response to demands for greater “direct democracy”. The randomly selected group of 150 French citizens, or the “150” as they came to be called, were tasked with finding ways of rapidly shifting France towards a greener economy. Its mission in a nutshell: to cut greenhouse gas emissions by 40 percent (compared to 1990 levels) by 2030.

Two of the key recommendations are a prohibition against “ecocide” and the inscribing of the fight against global warming in the French constitution. The 150 – who examined reforms across six major areas including consumption, production, work, travel, housing food and governance – had presented 149 proposals by October last year. Only three were rejected.

The measures have been included in two draft laws, the “Climate and Resilience” bill and a separate constitutional bill. Some of the citizens’ recommendations include a ban on advertising fossil fuels, restrictions on short-haul domestic plane travel if other transport is available, and bans on nitrogen and other polluting fertilisers used in farming. While the draft laws are due to be debated by MPs and government ministers in the National Assembly at the end of March, many of the citizens who met for the last of a three-day video conference on Sunday have already expressed some frustration and disappointment.

One citizen named Benoît told the regional daily ouest France  that he didn’t expect the measures put forward by the citizens’ council would ultimately carry much weight with the government.

His view is shared by environmental groups and other citizens of the council who have pointed the finger at steps taken to discard some earlier measures and water down others.

The High Council for Climate, an independent body, on February 23 criticised the recovery plan, green energy changes to buildings and other parts of the climate legislation that it said were lacking in ambition and the scope necessary to slash greenhouse gas emissions.

Cyril Dion, a French film director, actor, writer and environmentalist who had originally been appointed by Macron to help oversee the citizens’ group, launched a scathing public attack against the president, accusing him of breaking his promise to accept proposals “without filtering” or amending them.

He launched an online petition  late in 2019 to “save the convention” that garnered over 350,000 signatures in two weeks and wrote an open letter to French daily Le Monde to remind the president of his promises.

“For this democratic initiative to work, it is essential that you commit to taking up the proposals resulting from the citizens’ deliberation ‘as is’ and submit them to the French people or to the MPs … For years, politicians organised ‘participatory democracy’ that was a sham. Citizens are consulted and then elected officials very often do nothing. Experts are appointed, work hard … and then their recommendations are ignored, unraveled, weakened,” he wrote.

Macron shot back in an interview with the French online media outlet Brut, saying “these are not issues on which we can say, ‘Take it or leave it’ – that’s wrong”. He added that the state should not consider the climate proposals of 150 citizens to be inviolate like “the Bible or the Koran”.

Some say Dion’s criticism was warranted. According to Hélène Landemore, a professor of political science at Yale University and author of the book “Open Democracy: Reinventing popular rule for the 21st century”, the president “promised too much when he talked about sending the proposals of the citizens ‘without filtering’” directly to a referendum or parliamentary debate.

It has also given Macron’s political rivals ample ammunition. European parliament member François-Xavier Bellamy of the right-wing Les Républicains party said the president was taking a “populist turn” with the CCC and said it lacked any legitimacy.

“Has representative democracy become so discredited that we now think that 150 randomly picked people working in a closed room are enough to produce propositions that truly resemble what the French people want?” he asked during an interview on Sud Radio in June 2019. “I don’t think so,” he added.

In embracing citizens’ panels, Macron has gone where previous presidents have feared to tread. He is arguably the first French leader to entrust French citizens with the serious business of policy-making – and on an issue as contentious and significant as climate change.

Unlike other citizen panels

Armel Le Coz – co-founder of Démocratie Ouverte, a French NGO that designed the protocols for the CCC – says the concept for the council was to “try to imagine a new form of deliberative democracy”.

“The citizens’ convention on climate is very different to other citizens’ panels,” Le Coz explained. “Firstly, it was overseen directly by the president. Secondly, while past governments have called for citizen participation on issues such as Genetically Modified Organisms (GMOs), nuclear waste and vaccines, these initiatives were purely consultative and were always led by ministries or other government institutions.”

He said the CCC has demonstrated that French citizens from diverse backgrounds “are capable of articulating ambitious and realistic proposals on a complex subject with high stakes for society”. In the future, he sees citizens’ conventions becoming an everyday function of French institutions with the power to trigger referenda and legislative proposals.

And while he acknowledged some participants found fault with the process, he attributed their grievances to the fact that the CCC is chartering new political territory.

Landemore agrees that Macron took a “political risk” but says he was probably convinced of the merits of going ahead with the landmark citizens convention following the success of the country’s Great National Debate, which was launched in response to the Yellow Vest protests and included 21 citizen advisory groups.

Though the president has managed to steer the government towards an ecological course, Landemore sees challenges posed by an institutional culture with a lack of appetite for radical shifts in policy.

“The problem I see is that it’s one thing to have the discourse and ambitions, another to have the proper institutional culture to deliver. Whatever Macron’s own sincerity, there are too many people dragging their feet, rolling their eyes and pushing a different agenda.”

While it is unlikely that the draft bill’s emissions reduction target will be reached, Landemore believes the CCC’s legacy “will be much wider and long-lasting than today’s disappointing mood suggests”.

“We’re in the early stages of experimentation with citizens’ assemblies,” she noted. “I understand the disillusionment of some in the CCC right now but it is not a complete failure either – they fulfilled their mandate and delivered a coherent set of proposals.”

The real test, she says, will be whether it succeeds in getting a referendum  on adding a preamble to the constitution.

“Now that would be a symbolically important victory.”