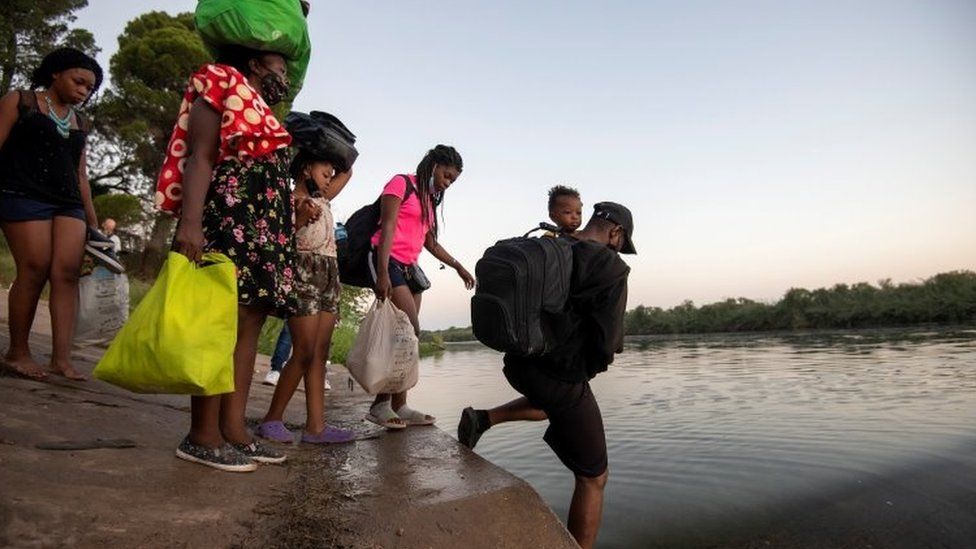 US officials have moved thousands of migrants away from a Texas border town that has seen an influx of mostly Haitian migrants over the past week. More than 10,000 people had gathered under a bridge connecting Del Rio in Texas to Mexico’s Ciudad Acuña.

Local officials have struggled to provide them with food and adequate sanitation. Some 2,000 people were moved to immigration and processing stations on Friday.

The US government says it plans to fly the migrants back to where they began their journeys.

Flights are expected to start on Sunday, with the US currently negotiating returns with the countries in question.

Haiti’s Prime Minister Ariel Henry sent support to the migrants on social media late on Saturday, saying “arrangements have already been made” to welcome those who return.

But some migrants say they are afraid to return. “In Haiti, there is no security,” Fabricio Jean, 38, who is at the camp with his wife and two daughters, told the Associated Press. “The country is in a political crisis.”

“There are people killing each other in Haiti, there’s just no justice,” another father of two, 29-year-old Stelin Jean told the Texas Tribune. “I just want to live a calm life without any problems, I want to live somewhere where I know there’s justice.”

The US Department for Homeland Security said in a statement that the transfers will continue “in order to ensure that irregular migrants are swiftly taken into custody, processed and removed from the United States consistent with our laws and policy”.

It added that US Customs and Border Protection is sending 400 additional agents to Del Rio, a city with a population of roughly 35,000.

Del Rio’s Mayor Bruno Lozano has declared a state of emergency and described the situation as “unprecedented” and “surreal”. He said border patrol had been overwhelmed and that “agitated” migrants were living in impossible conditions.

The makeshift camp at Del Rio has few basic services, and migrants waiting in temperatures of 37C (99F), have been wading back across the river into Mexico to get supplies.

The migrants are mostly Haitians, with some Cubans, Peruvians, Venezuelans, and Nicaraguans also present.

Many Haitians left the country after a devastating earthquake in 2010, and a large number of those in the camp had been living in Brazil or other South American countries and traveled north after being unable to secure jobs or legal status.

Cubans too have been fleeing the island’s worst economic crisis since shortly after the end of the Cold War, the BBC’s Mexico correspondent Will Grant reports.

He says many of the migrants in Texas have made probably the most treacherous migrant journey in Latin America by crossing the thick jungle of the Darien Gap between Colombia and Panama on foot.

The US government has reported a surge of migrants at the border with Mexico this year.

The number of migrants detained there in July exceeded 200,000 for the first time in 21 years, according to government data.