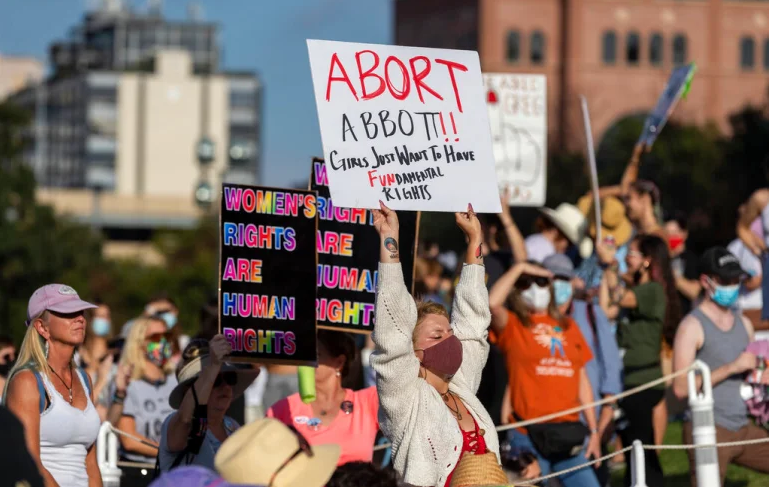 When Trisha* discovered she was pregnant in May of last year, the nearest abortion provider was more than 482km (300 miles) away in Fort Worth, Texas.

The 27-year-old told Al Jazeera she didn’t feel comfortable discussing her options with anyone in her conservative hometown or family – so at almost eight weeks pregnant, she drove herself to the abortion clinic.

After spending $150 in gas to get to Fort Worth, she cried alone in the parking lot of a Whole Woman’s Health building before walking in to seek the procedure.

“It breaks my heart to know that there are people in both my community and my family that would dehumanise women for seeking out these services without knowing the circumstances,” she said. “There are other people who are in a place of fear and uncertainty without privilege and resources to find a way out.”

The Texas legislature passed Senate Bill 8 in May, with supporters calling it a “measure to protect the lives of the unborn”.

Many advocates of reproductive rights assumed the law would be blocked in the courts as similar legislation had been in the past. But the US Supreme Court declined to act in August, and in October a court injunction that paused the law was swiftly overturned after Texas appealed for it to be reinstated.

That means the legislation, which effectively bans abortions after six weeks of pregnancy and allows any citizen to sue anyone who provides or helps with abortion services, is in effect. Still, the broad ban on abortion services hasn’t stopped patients from seeking help.

Many still show up at clinics, assuming the media exaggerated or that they misunderstood the law, said Marva Sadler, director of clinical operations at Whole Woman’s Health, an abortion provider that operates four clinics across Texas.

But the clinics, bound by the new law, are forced to turn people away. “They come in with a glimmer of hope that we can help them,” Sadler told Al Jazeera. “There’s a moment of shock, of disbelief that this is really a thing – then a moment of panic over what to do next.”

“Once SB8 went into effect I panicked, as I’m sure a lot of people did,” said Lieck. “If my birth control fails or if I’m raped and it’s past six weeks, I’m going to be forced to carry a rapist’s child, which is incredibly traumatic.”

For years, Lieck has sought tubal ligation surgery to prevent pregnancy, but even that operation is hard to obtain in Texas, where doctors told her they preferred to operate on older women who already had children. Faced with SB8, her search became urgent. She found a doctor who approved the procedure, scheduled for early December.

“I recognise the privilege that I have with good health insurance through my university, financial stability, and access to educational resources,” she said. “Others aren’t so fortunate.”

In 2012, the state legislature mandated a sonogram and a 24-hour wait time before patients could officially opt for the procedure. A year later, it required formal legal agreements with local hospitals for abortion clinics to operate, forcing most of the facilities in the state to close. And in 2017, it barred most primary health insurance policies from covering abortion services.

But the battle over reproductive rights in Texas portends a larger, nationwide fight. Opponents of abortion services have long stated their intention to overturn Roe v Wade, the 1973 US Supreme Court decision that established the right of women to terminate their pregnancies.

Former US President Donald Trump promoted the idea of scrapping Roe v Wade as he appointed three conservative justices to the high court during his term.

But even in Texas, where the current battle over reproductive rights goes back years, that idea seemed far-fetched to activists until August 31. That night, Diana Gomez sat refreshing the US Supreme Court website.

Gomez, communications director for the advocacy group Progress Texas, had watched SB8 rise through committees to pass the state legislature in May, but she said she expected the Supreme Court to take action before the bill took effect, just as it did for other state-level abortion restrictions.

“Once it hit midnight, that became the first incident where the Supreme Court did not apply Roe v Wade as precedent,” Gomez told Al Jazeera, about SB8 coming into effect. “It was one of the first peaks into a possibly horrible future in which Roe v Wade is overturned.”

In December, the country’s top court will hear a case from Mississippi regarding a ban on abortions after 15 weeks that could overturn Roe v Wade, opening the way for abortion bans by other states.

Yet regardless of the decision in that case, the success of SB8 will likely inspire other states to advance legislation blocking or restricting abortion services. One such bill is already advancing in Florida. “It’s not just Texas that wants to pass this, it’s a coordinated effort,” Gomez said.

For now, Texans seeking abortion services must rely on approximately 10 nonprofit organisations that offer financial assistance to help them travel out of state. But the volume of requests is more than many groups can handle.

One such group, Fund Texas Choice, said it received 10 to 15 calls per week from people seeking financial assistance to halt their pregnancies before the Texas law came into effect. After September 1, the number of calls shot up to 15 a day.

Previously, the organisation provided between $500 and several thousand dollars to each patient to access services. Now, each requires an additional approximately $1,000 to cover travel, lodging and food on their trip out of state.

“The need has increased and obviously, we can’t supplement that need,” said Anna Rupani, executive director of Fund Texas Choice. “That’s not sustainable.”

She said more than 65 percent of Fund Texas Choice clients are people of colour who more often tend to be economically disadvantaged. That means they face greater financial challenges in raising a child or travelling out of state to end a pregnancy.

“Most folks who seek out abortion services are folks that already struggle to make ends meet, usually Black, Indigenous and people of colour,” Rupani said.

Aimee Arrambide, executive director of Avow Texas, a reproductive rights advocacy group, echoed that. “With the law, combined with the confusion, combined with the lack of resources, there will be thousands of people in Texas forced to carry pregnancies against their will,” she said.