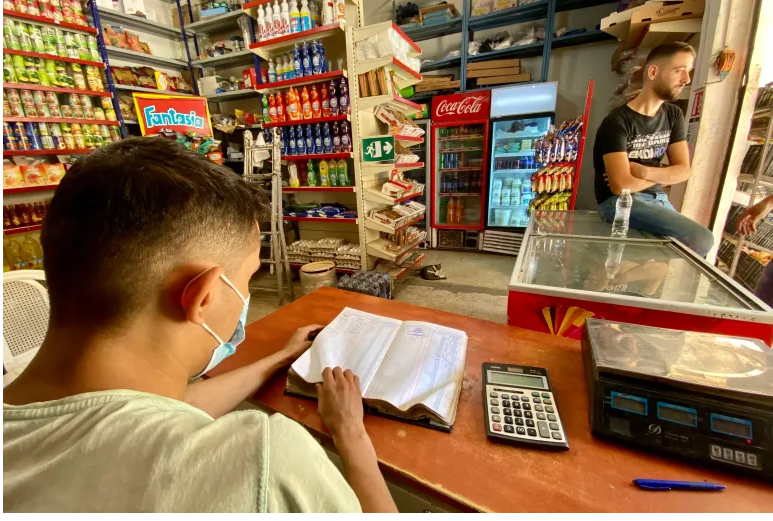 Mohammad sat in the smaller grocery store where he worked and flipped through the pages of a notebook, filled with a long list of customers indebted to the shop.

“More and more people are struggling with money and asking us to let them pay later,” the 30-year-old Syrian refugee from Deraa told Al Jazeera, as a growing fuel crunch has led food prices to skyrocket.

“We have to try to be patient with them. Things have become much worse with the fuel crisis over the summer.”

The small shop is located in the heart of Beirut’s semi-industrial Karantina neighborhood, a stone’s throw away from the destroyed port.

Many of the shelves at the shop were packed, but that is because people are simply focusing on household necessities, Mohammad said.

“So, nobody is buying coffee as you can see,” he said, pointing to dozens of jars on the shelves.

“Most people go for bread, vegetables, and those dairy products in the fridge over there.”

But even many staple food items were no longer affordable: he has struggled to sell olive oil, as it has soared in price.

Lebanon’s food crisis is not a recent development. The World Food Programme estimated that food prices have gone up by 628 percent in just two years, compounding Lebanon’s economic meltdown, which has plunged three-quarters of its population into poverty and devalued the Lebanese pound by about 90 percent.

However, the food crisis has significantly worsened in recent months amid fuel shortages and price rises.

The Lebanese government has gradually been lifting fuel subsidies since June, and has increased petrol prices four times in under a month in a bid to deal with crippling shortages. At the same time, it has struggled to unroll a cashcard programme to replace the subsidies.

Meanwhile, Lebanon has been increasingly hit by extended blackouts as state-provided electricity has dwindled to almost nothing, while diesel fuel prices for private generators have skyrocketed, too – if fuel can even be found in the first place.

“Our food prices are getting more expensive because we have to pay much more for the private generator provider to account for fuel price hikes,” Mohammad said, shaking his head in disbelief.

“And all our produce in those baskets over there have especially become more expensive, because the guy who delivers it to us from the vegetable market has to pay more for gasoline.”

Lebanon’s economy ministry announced earlier this week that they had raised the price of bread for a sixth time this year – partly due to the weakening local currency, but also due to the petrol and fuel crisis as transportation costs have soared.

“Fuel and gasoline prices are continuing to increase, so we anticipate that food prices will continue to go up,” World Food Programme spokesperson Rasha Abou Dargham told Al Jazeera.

In April, the WFP provided food assistance for one in every six people. After the fuel crisis worsened, they now support one in every four people in Lebanon.

Mohammad worked for about 10 hours in the shop every day for a modest income, and a small allowance to buy food items from the shop which comes to just less than 900,000 Lebanese pounds ($47).

With his salary and some help from charities he could just about pay for his rent and some other expenses, so he has had to compromise on the food he eats and he now skips one meal every day.

According to the UNHCR, he is among the 67 percent of Syrian refugees in Lebanon who are now skipping meals.

“I definitely don’t eat meat anymore – that’s out of the question,” Mohammad said. “But thankfully, I can get by with no more with two meals a day.”

‘We try to get the kids yoghurt’

Two blocks away, Walaa – who fled to Lebanon from Syria about five years ago – looked after her daughter and three sons in their cramped two-room ground floor apartment. The kids were out of school, and spent most of their time indoors. Her 12-year-old, the eldest among them, sat quietly watching his siblings. Walaa said he weighs just 17 kilograms.

It was past noon, and the kids still had not eaten breakfast yet. “We try to make sure the kids have two meals every day,” she said.

Walaa’s husband prunes trees in downtown Beirut, but has struggled to work as many hours as he used to after he was wounded in the Beirut Port explosion more than a year ago. He suffered from multiple bone fractures and head trauma.

She has tried to work various day jobs to help, but the family was behind on rent and soaring food prices further squeezed their already straitened budget.

“We now just buy bread, pasta, rice, and try to get onions, tomatoes, and potatoes whenever possible,” Walaa said. “We try to get the kids yoghurt and cheese once or twice a month because they really like it.”

The family had also resorted to drinking tap water, as bottled water has become increasingly expensive, which Walaa said has made the kids sick.

Meats and fruit have become unaffordable for the family, but once a month, they will buy chicken.

“It’s like a celebratory occasion when that happens,” she said with a sigh. And because of that, she believed the kids are fatigued and lethargic.

“They get tired when we go for short walks.”

Impoverished Syrian refugees have been particularly hard hit by the crisis.

According to the UNHCR, an estimated 90 percent of Syrian refugees in Lebanon now live in extreme poverty – amid a wider figure of 36 percent in the country.

“That means they cannot afford what we consider the basic food items for survival,” WFP’s Abou Dargham explained. “And this does not include meat, nor dairy products.”

The Lebanese government, now led by billionaire Prime Minister Najib Mikati, hopes to renew negotiations with the International Monetary Fund for a recovery programme, and to receive economic aid from the international community.

Experts have said it could take years for the economy to recover, with Lebanon needing to uproot decades of systematic corruption and restructure an inefficient economy.

Meanwhile, aid organisations and charities are struggling to keep up with the surging demand, while the Lebanese government remains cash-strapped. The United Nations recently said that starvation could be a “growing reality” for thousands.

Abou Dargham said that this hunger crisis was “unprecedented”, and has also affected hundreds of thousands of Lebanese families that never used to worry about putting food on the table.

“We’ve tripled our assistance, but the scale-up is gradual,” she said.

“People who once never had issues with putting food on the table have suddenly plunged into poverty.”